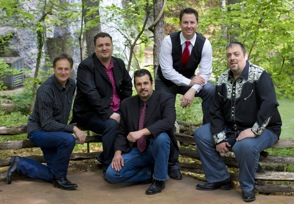 Spoken 4 Quartet announces Steven Hickinbotham as the new baritone. Original baritone Jeremy Wilkerson left the group to pursue other avenues and to spend more time with his family at the end of 2011. J.D. Miller had been filling in as baritone and pianist during the time of transition.

Steven was previously with the Melody Boys Quartet. After leaving them, he continued to sing locally and moved back to his hometown of Thayer, Mo. Later, he helped co found the group Faith's Journey where he sang lead for several years.

Steven is excited about joining Spoken 4 Quartet. "Singing along side these guys I know this is where God wants me to be. I'm honored to be able to share the message of Christ to the world. There's something special here and I'm just glad that I'm a part of it," he said.

Spoken 4 Quartet is based in Branson, Mo. They are a group that I have been following since they formed in 2007. Owners Jon Charles Taggart and Cecil Stringer sang together in the Cumberland Quartet, which was formerly Silver Dollar City's in-house gospel group. It was during that time that I was introduced to them. They are very well known throughout the Ozarks areas. And when they come back to perform at Silver Dollar City, they always draw a large crowd! If you haven't heard Spoken 4, I encourage you to check them out!

For more information on Spoken 4 Quartet, visit their website.
Posted by Lauren at 7:30 AM
Email ThisBlogThis!Share to TwitterShare to FacebookShare to Pinterest